THE CONFERENCE BOARD HELP WANTED ONLINE®

The Conference Board®-The Burning Glass® Help Wanted OnLine® (HWOL) program measures the demand for labor in the United States using advertised online job vacancies. Help Wanted OnLine® reflects trends in employment opportunities across the U.S. and may be a leading indicator of the labor market and overall economic activity. HWOL is a proprietary data set available by geography, occupation, industry, and skills and publishes monthly press releases on changes in online job ads.

These data are for analysis purpose only. Not for redistribution, publishing, databasing, or public posting without express written permission. For further information on purchasing data, please contact Jeanne Shu: Jeanne.Shu@conference-board.org

INSIGHTS FOR WHAT'S AHEAD

Tech companies headquartered in Silicon Valley have increased hiring for tech jobs in other parts of the country. Tech companies headquartered in the San Francisco or San Jose metro areas were identified using data from D&B Hoovers. The distribution of job ads in computer and mathematical occupations for these companies was then calculated by metro area using the HWOL universe of job ads.

Tech jobs have relatively high salaries, especially in high performing companies in Silicon Valley. These companies, however, have long been criticized for their lack of diversity. Expanding their hiring to areas where there is a stronger concentration of people of color can help increase the representation in high paying jobs, especially for Black workers.

Tech companies headquartered in Silicon Valley have increased hiring for tech jobs in other parts of the country.

Lower skill office jobs including office support and clerical occupations also experienced significant growth in job ads mentioning remote work. Before the pandemic, clerical/admin office workers were less likely to work from home. A large percentage of these workers are hourly/non-exempt (eligible for over-time pay), which creates complications in a remote work environment. The COVID-19 pandemic appears to have diminished these barriers as lockdowns forced companies to deal with these issues. A more permanent shift to remote work appears likely for these jobs. 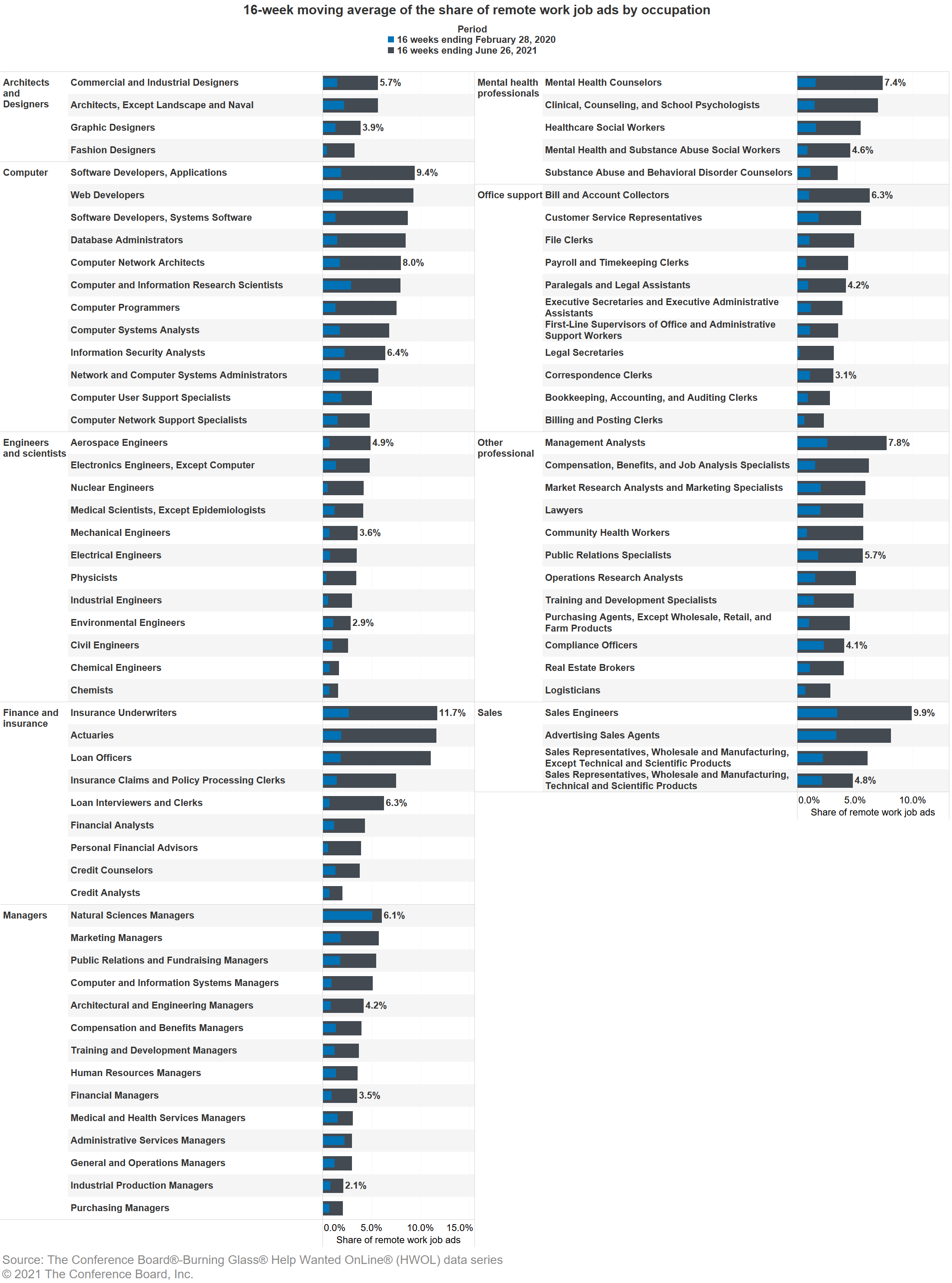 THE DECLINE OF CITY CENTERS AND THE DONUT EFFECT

Demand for services and real estate has moved away from city centers, creating a “donut effect” where prices and activity are rising faster in surrounding suburbs.

Shown in the chart below, online labor demand has exceeded pre-pandemic levels throughout the country, but hiring activity rose greater in less dense areas, namely in non-principal cities and smaller metro areas. Principal cities have a large concentration of workplaces and are densely populated, especially in larger metro areas. With a significant share of the population working from home full-time since the pandemic, proximity to the office is no longer a priority for many. As a result, residents have opted to invest in less dense areas and surrounding suburbs.

Comparing Februay 2020 to May 2021, the chart below shows that principal cities in the largest metro areas experienced the smallest rise in the number of online job ads relative to the other five geographic groups in the United States:

Outside of principal cities in large metro areas, the number of online job ads increased greater than 20 percent. This is likely driven by increased spending in local communities and an increase in residents from principal cities that left for less densely populated regions, driving up demand for real estate in adjacent suburbs or nearby rural areas. 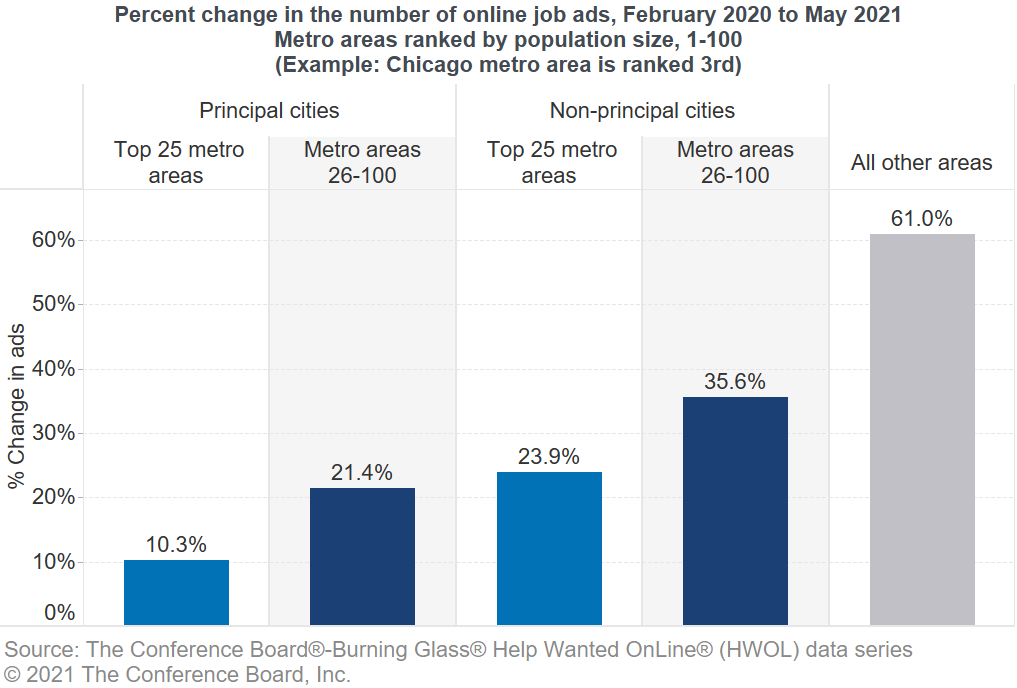 Tech occupations in metro areas along the East and West Coast and in Texas demand more coveted skills. Shown in the figure below is the percent of online tech job ads from 2019 to March 2021 that mention at least 1 of the top 50 fastest growing tech skills (e.g., TypeScript, DevOps). Individual skills mentioned in online job ads are parsed and categorized in the HWOL dataset. These skills are then calculated as a share to determine which skills are mentioned more in online job ads relative to others in tech occupations (Computer and Mathematical occupations, excluding Actuaries). The top 50 skills with the largest growth in share from 2019 to the last 12-months ending in February 2021 define the fastest growing tech skills. Metro areas with a higher share of the fastest growing skills suggests that the most advanced tech work is being done in these locations.

San Francisco and Seattle are leaders where nearly 50 percent of all tech ads demand at least 1 of the top 50 fastest growing tech skills. Metro areas in Texas, including Austin and Dallas, rank high along with Denver, New York, Boston, and Washington, DC. The Midwest and South (excluding North Carolina and Atlanta) generally underperform where less than 40 percent of tech ads demand these growing tech skills in most metro areas. Fayetteville, AR notably outperforms many larger areas due to the significant presence of Walmart and supporting companies.

Tech ads on the East and West Coast and in Texas lead the country in demand for growing tech skills, while the Midwest and South lag behind 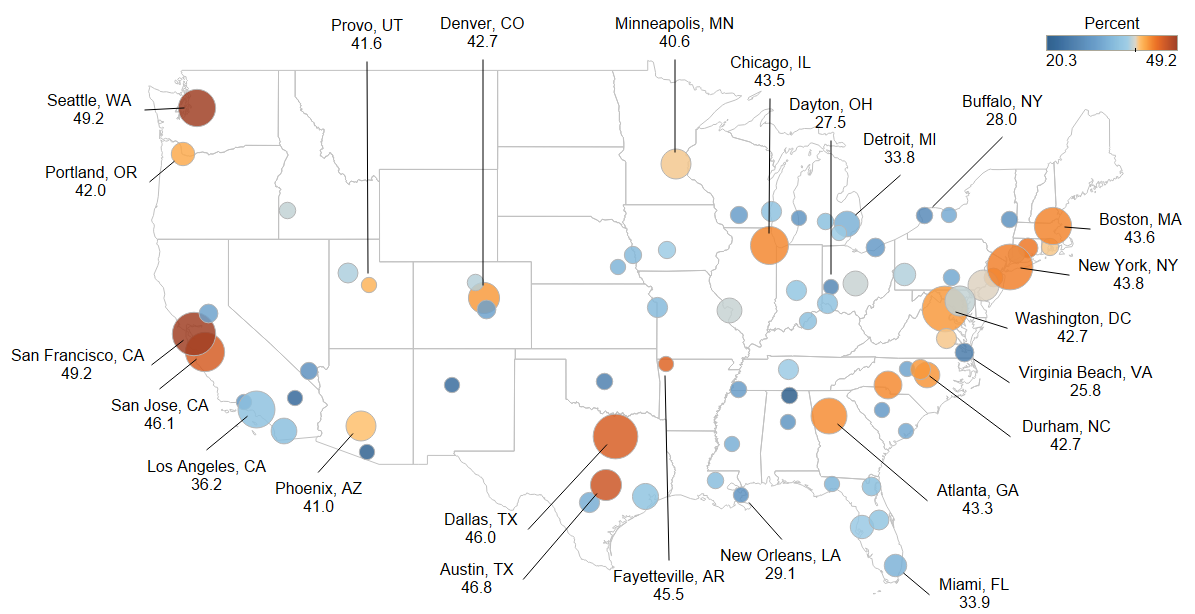 BLUE COLLAR AND MANUAL SERVICES JOBS ARE IN HIGH DEMAND

As in-person services began re-opening in early 2021, blue-collar and manual services occupations grew rapidly in demand and remain elevated (Chart below). Built-up demand following months of state-imposed restrictions resulted in the need for more workers to provide these services. This high demand is likely a major cause of recruiting difficulties many employers are experiencing in 2021. 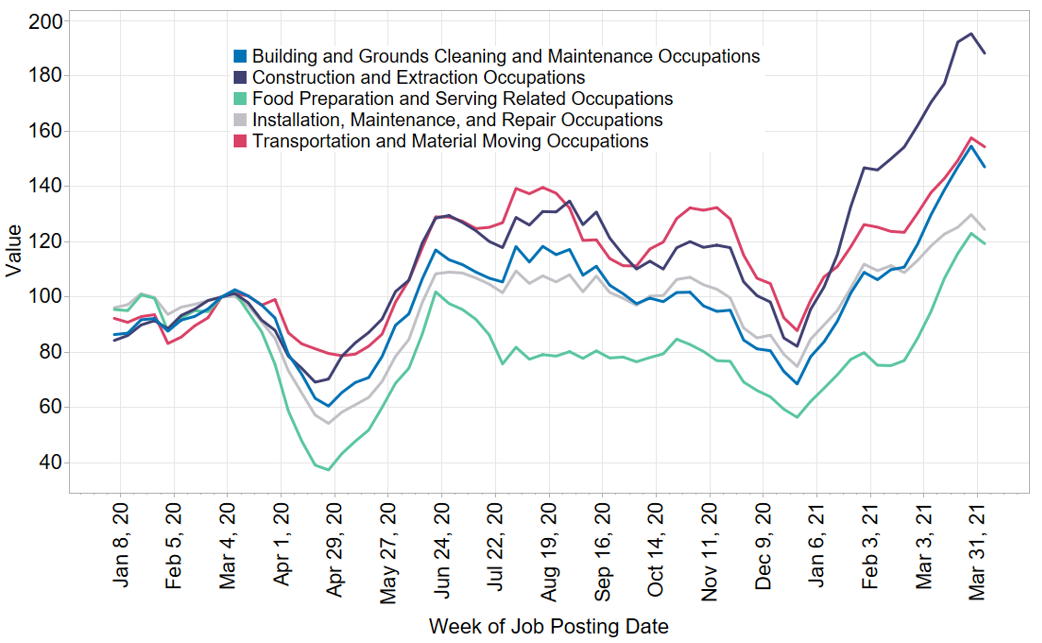 Since 2019, certain skills and groups of skills have grown more rapidly in demand. The HWOL dataset, provided by Burning Glass Technologies, identifies individual skills mentioned in online job ads and groups them into skill clusters. These skills and skill clusters are then calculated as a share for select occupations to determine which skills are mentioned more in online job ads relative to others in those same occupations.

In quickly evolving tech occupations, new and emerging skills are very prominent. Online job ads for Computer and Mathematical occupations (excluding Actuaries) defined by the Standard Occupational Classification (SOC) System were used to isolate tech jobs in the US.

Chart 1. Emerging skill clusters including Artificial Intelligence and Cloud Solutions have grown rapidly relative to others 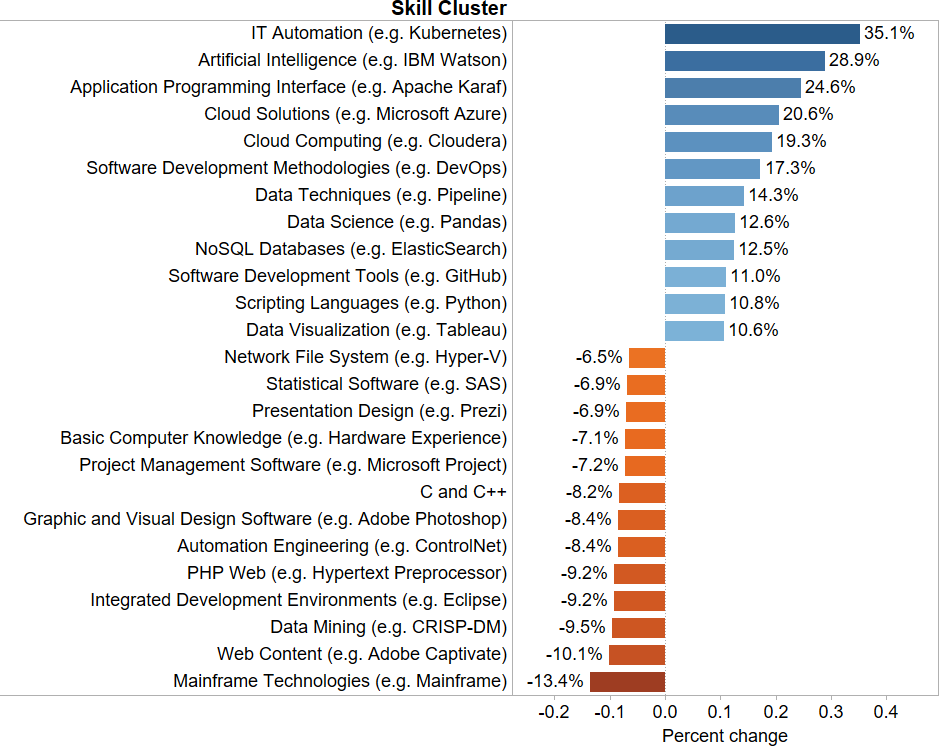 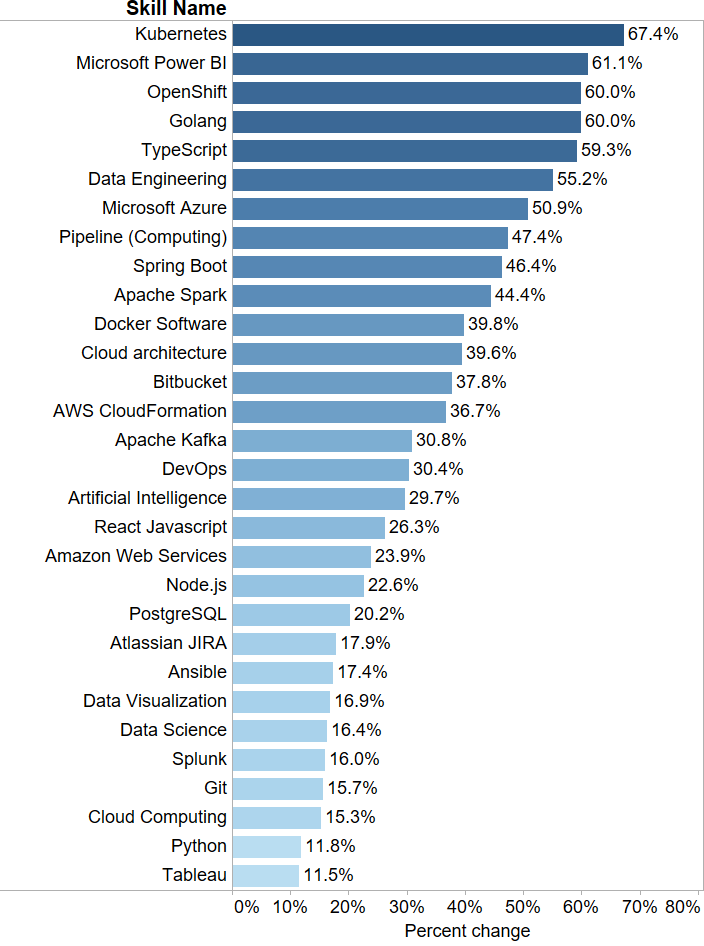 What types of jobs will experience a large permanent increase in remote working? 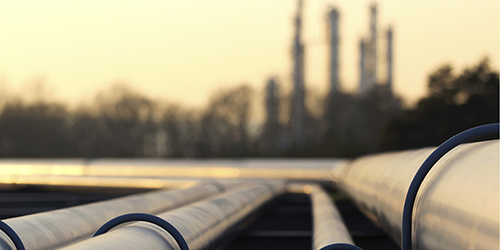 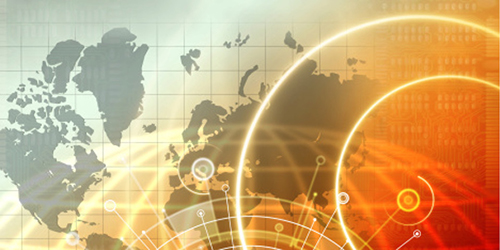 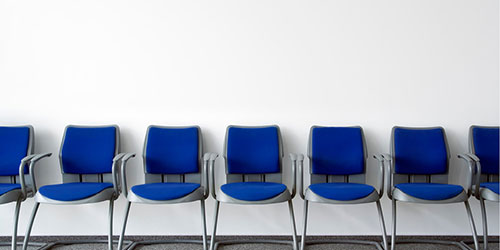 Greatly Delayed Pickup in Recruitment: A Brief Account of How American Business Woke Up to GDPR Through the Lens of Online Job Ads

The Work That Can’t Be Offshored or Automated