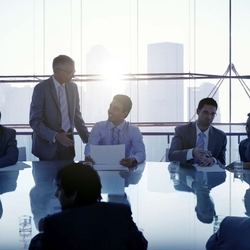 Director Notes India: Board Meeting Attendance—Findings from a NIFTY 500 analysis

In spite of an Indian legal framework that offers directors many options to attend board meetings, attendance at NIFTY 500 companies is still down.

Director Notes India: India at a Crossroads — Transitioning to a renewables-based electricity system

Indian companies need to focus on the spirit of the regulations instead of merely undertaking a check-the-box compliance when it comes to the appointment of women directors.

Voting by mutual funds at annual general meetings of public companies in India has increased, and these funds are likely to vote in line with management’s recommendations.

This Director Note examines the emerging trends around sustainability and business responsibility for top Indian companies.

Corporate Board Practices: 2018 India Edition reviews public disclosures of board composition, governance practices, and granted executive remuneration made by Indian publicly-traded companies in the NIFTY 500 index. The NIFTY 500 index comprises the largest 500 companies, by capitalization, listed on the National Stock Exchange of India (NSE). According to the most recently released NSE statistics, the NIFTY 500 index represents about 95.2 percent of the free float market capitalization of the stocks listed on the NSE.

Shareholder Voting Analytics (2014-2016): India Edition reviews proxy voting data of companies that held their annual general meeting (AGM) between January 1, 2014 and December 31, 2016 and at the time of their AGM, were in the S&P BSE 500 index and/or the NIFTY 500 index. The two universes comprise most of the largest publicly traded businesses in India. As of the date of publication of this report, the S&P BSE 500 index represents nearly 93 percent of the total market capitalization of companies listed on the Bombay Stock Exchange (BSE) and covers all 20 major industries in the Indian economy.

This report marks the inaugural edition of The Conference Board Sustainability Practices in Asia-Pacific, a study that analyzes the 2015 disclosure of environmental and social practices by public companies in 12 Asia-Pacific markets: Australia, China, Hong Kong, India, Indonesia, Japan, Malaysia, Singapore, South Korea, Taiwan, Thailand, and Vietnam. The sustainability disclosure data for this report are based on the full universe of publicly listed companies across these markets (a total of 24,623 companies).

The accompanying Excel database is a unique reference tool enabling businesses to benchmark their activities and performance against peers. Data on 95 environmental and social practices can be segmented by country, sector, and revenue group.

Director Notes India: The Role of the Nomination Committee in Board Independence and Composition in Indian Companies

Concentrated ownership of Indian companies and the use of complex group company structures create the potential for abusive related party transactions (RPTs) that erode value for minority shareholders. India’s substantive legal framework for regulating RPTs has slowly converged toward international standards. While previously there was considerable emphasis only on disclosures, other mechanisms such as board or audit committee monitoring and approval of RPTs or independent shareholder approval are now part of the Indian legal framework on RPTs. The real import of the new standards will depend on the extent to which minority shareholders, including institutional shareholders, participate in the evaluation and voting rights they have been afforded.

Handbook on Corporate Governance in India: Legal Standards and Board Practices

Handbook of Corporate Governance in India is designed as a practical reference tool reviewing key features of the legal and regulatory standards applicable to today’s Indian corporate boards, from their composition to their activities.

To enable peer-comparisons and benchmarking, The Conference Board offers a portfolio of data and analyses on corporate governance, proxy voting, sustainability, and citizenship.