Tags
Full Listing
Podcasts
What the Data Tells Us About Immigrant Executives in the U.S.
We Interviewed 57 Female CEOs to Find Out How More Women Can Get to the Top
How to Ask Your Boss for Time to Learn New Things

A lot of research has already been done on the significant contribution of immigrant scientists and engineers to the U.S. innovation system. Less research, however, has been done on the presence of migrant and immigrant leadership in corporate America. While there has been some research done on ethnic minorities’ representation in senior corporate roles in the U.S. — for example  the study of the ethnic composition of boards in corporate America by Richie Zweigenhaft — studies of immigrant leadership talent are still scarce. This is despite the fact that many well-known CEOs of American companies are immigrants, such as Elon Musk (Tesla), Sergey Brin (Google), Satya Nadella (Microsoft), and Dara Khosrowshahi (Expedia and Uber).

This lack of study is particularly troubling given that nearly 60% of American companies are facing leadership talent shortages that are impeding their performance. As of 2009, U.S. companies spent 24% of their budget training on leadership development. This shortage is expected to worsen given that demographic change in the U.S. and other advanced economies is shrinking the size of the key age group (age 35-55) from which leadership will emerge.

In short, we need to better understand the contributions immigrants make as leaders in corporate America, as well as the paths they take to get there. To shed light on these questions, we used name matching techniques. As part of our research for a forthcoming INSEAD working paper, we made use of data from the U.S. Security Exchange Commission and applied name matching techniques (first and surnames) to first identify the ethnic background of individual corporate executives. We then tracked down their educational background, particularly whether they are U.S. or foreign-educated, and the sector and industry in which they work. We treat the location of an executive’s first degree as a proxy for country of origin; an executive who received their first degree in India but now leads a U.S. company qualifies in our data as an immigrant, whereas an individual of Indian descent whose first degree was from a U.S. university does not. We focused on foreign-trained talent of Chinese, Indian, and Middle Eastern descent. We chose these groups because our methods make it easier to identify members of these communities through name-matching.

While this technique is not without its flaws, our name-matching techniques are robust enough to capture most individuals within a specific ethnicity. It’s true that some immigrants could have arrived young to the U.S. and enrolled in U.S. universities before they launched their careers. Our analysis would not count them as immigrants, therefore our estimates can be considered a lower bound on immigrants’ contribution to U.S. executive leadership.

We had access to other details about these individuals, so we could double-check instances of potential overlaps or errors. We could also double-check the information about the individual on the internet to verify in case of confusion whether an individual belonged indeed to one group or another, including conducting a global search on the first or family name. The result was that of a database of 147,336 corporate leaders for which educational background was available, we could identify a sample of 3,098 corporate leaders of Chinese ethnicity, 3,095 Indian; and 1,395 of MENA ethnicity. The remaining were 139,748 were from other ethnicities.

Where do they work?

IT and healthcare are the two sectors with the highest concentration of foreign-trained executives of all ethnicities. Consumer Products and Banking and Finance are two other major concentration industries. 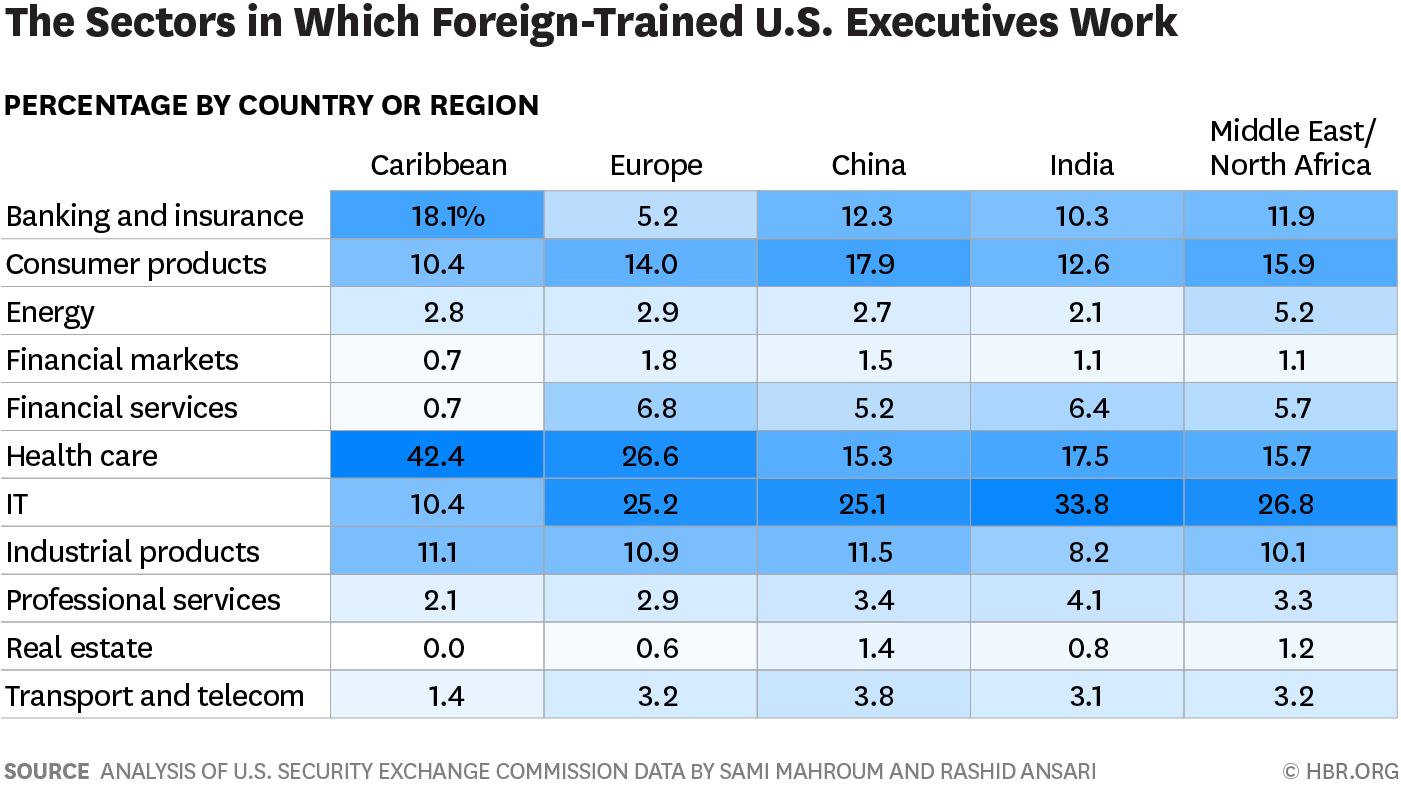 About 42% (or 61) of executives who received their training in the Caribbean are employed in the Health sector; whereas 45% (or 328) of executives trained in the Middle East are employed in the IT sector. Healthcare appears as the main sector of employment for executives (ca. 27% or 965) trained in the EU and Europe more broadly. While a concentration of immigrant executive talent in the IT sector can be explained by higher level of internationalization (foreign investment and export) in this sector, their concentration in healthcare can be explained by the growth in demand for all types of talent in this sector globally.

Further research will be required to gain insights into the performance of immigrant leadership talent in comparison with the overall population of business leaders. But given the disadvantage immigrants and ethnic minorities still face in the labor market, we expect ethnic and immigrant leaders to be high performers. This is important as research has shown that organizations with the highest quality leaders were 13 times more likely to outperform their competition in key competitive metrics including financial performance, quality of products and services, employee engagement, and customer satisfaction. The U.S. has traditionally had an advantage attracting immigrant talent from Europe and elsewhere. Yet, stricter U.S. immigration policy can mean that other governments will find it easier to attract leadership talent that might otherwise end up in America. However, with the anti-foreign worker Brexit discourse in the UK, it is Canada that appears particularly well suited to gain an advantage in the competition for leadership talent. If the U.S. hopes to address its leadership shortage as its population ages, it needs to embrace immigration, and acknowledge the significant contribution that immigrant executives already play.