Globally, many leading organizations have introduced workplace policies to enable flexible work, recognizing its benefits for staff retention, morale, commitment, diversity, recruitment, and being an employer of choice. But despite employee demand and some high-profile examples, it has proved harder to get broader adoption of those policies.

To address this apparent paradox, the New South Wales (NSW) government’s Behavioral Insights Unit used behavioral economics to try to nudge people to behave a little differently and to shift the norms and unwritten rules of workplaces. We did this in partnership with Transport for NSW’s Travel Choices program, which works with businesses to identify ways to encourage more commuters to avoid traveling to work during peak hours. 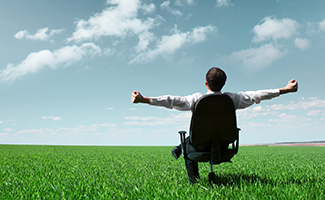 fieldwork with eight major organizations, which employed well over 1,000 staff who commuted to work in central Sydney. Our analysis showed that there were three important behavioral barriers to employees taking up flexible work:

Social norms. Organizational culture is often resistant to change, so even after the introduction of a flexible work policy like allowing staff to arrive and depart within “broadband” hours (that is, 7 AM to 7 PM), there can still be a strong 9-to-5 culture. Expressions of this include the raised eyebrows and half-joking comments made by peers when a staff member leaves the office earlier.

Staff perceptions of managers’ acceptance. Employees report that they are worried about being negatively judged by their managers if they ask for flexible hours, despite most managers saying they would view it positively. Employee views are reinforced by the example set by managers, many of whom do not work flexibly. As neither employee nor manager raises the issue, they persist in their mutual ignorance of each other’s views.

Individual life styles and habits. Commuting is known to be one of the “stickiest,” most resilient habits that we have. Employee life styles and nonwork obligations, such as the school run, caring, or going to the gym, are significant drivers of when people arrive and depart work.

Drawing on these findings, we wanted to see if behavioral economics could be used to encourage people to work more flexibly, especially to commute outside of peak hours. This would have the added benefit of reducing pressure on the transport system.

We worked with the NSW Department of Premier and Cabinet to try out three interventions. These were intended to influence social norms, adjust manager behavior, and encourage people to try out new commuting approaches where they could.

Intervention #1: Changing default settings in Microsoft Outlook calendars. Outlook defaults to highlighting 9 AM to 5 PM as the time people are available for meetings. To subtly nudge people to avoid early and late meetings, and so enable flexible start and finish times, we condensed the default available times shown in Outlook.

Intervention #3: Using a competition to disrupt habits. Many workplaces have a healthy degree of inter-team rivalry, so we ran a team-based competition. Teams could win points for arriving or leaving out of peak times as well as for often-devalued forms of flexible working, such as part-time work or working from home. Regular leader boards and a prize for the most flexible team encouraged participation.

We tested these interventions as part of a quasi-experimental trial to see if the interventions genuinely had an effect. Following the calendar change and manager prompting (interventions 1 and 2), there was a 3.3-percentage-point increase in the number of off-peak arrivals and departures.

Following this, we ran the competition (intervention 3) for nine weeks — enough time, we hoped, for people to disrupt old habits and form new ones. This had an even greater effect than the first interventions: Even two months after the competition had finished, there was still a 7.1-percentage-point increase in the number of off-peak arrivals and departures, which shows that not only did behavior shift during the competition but those new behaviors were sustained. This result reinforces the role that promoting flexible work policies can help manage transport demand.

Organizations wishing to institute change will find no shortage of (sometimes expensive) advice on how to do this. However, we’ve shown that even low-cost behavioral interventions can result in real shifts in workplace norms and culture. Using behavioral insights, and methodologies borrowed from behavioral sciences, you and your organization can test out simple behavioral tools to find what works for you.

This blog first appeared on Harvard Business Review on 11/03/17.