Tags
Full Listing
Podcasts
How to Deal with the Know-It-All in Your Office
To Achieve a Major Goal, First Tackle a Few Small Ones
Research: Objective Performance Metrics Are Not Enough to Overcome Gender Bias

When I was in seventh grade, a new girl joined my class. Let’s call her Selena. She came from a big city, and she knew it all — what to wear, the words to songs, how to talk to teachers. She’d even spoken French in Paris. Some classmates were admiring, while others were annoyed. But I felt I needed to compete with her. I boned up on odd song lyrics and nagged my mother for what I thought were sophisticated big-city clothes. It took me some months before I realized you can’t compete with know-it-alls. As I caught up, Selena just upped the competition. And then, after she’d been in our class for awhile, she got comfortable and eased up on her attitude, leaving me to look like the know-it-all of the class.

Although no one has left quite as big an impression on me as Selena, I have met many know-it-alls in my years in human resources. Many of them, like Selena, are new to their circumstances. Some are acquired in a merger; others are hired to bring new skills or experience to their work group. Their first impulse is to say, “When I was at Big Company, we did it this way,” not realizing that their new colleagues couldn’t care less about how they did it at Big Company.

These know-it-alls are unsure of their status in the group and are trying to establish their position. One 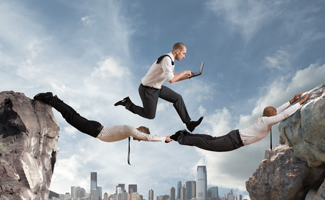 such HR newbie told me she knew everything about outplacement, and I didn’t, because she had laid off far more people than I had. This time I didn’t rise to the challenge. Instead, I tried to make her feel comfortable in her new position, and as that started to work, she relaxed her know-it-all behavior. If your know-it-all is new to the organization, you might try that approach first.

If you manage or mentor a know-it-all. You have an obligation to give them feedback. Let them know that their attitude is having a negative effect on their career. Be sure to keep your feedback specific to something you have observed, to keep it credible.

If the know-it-all isn’t a direct report, but a colleague. It’s up to you to decide whether to say something. Consider your relationship: If you are friendly and comfortable with each other, it may make sense to have the conversation. Start by asking permission: “Can I talk to you about something?” That helps get the conversation started in the right vein. Then talk about your direct observations, putting an emphasis on your colleague’s expertise and the consequences of flaunting it: “We all know you are an expert in this area, but when you gave the answer right away, Nancy and Jorge immediately went quiet, so they didn’t get a chance to think things through or give their own answers. Did you notice that?”

It’s not a good idea to try this with a colleague you don’t know well or don’t have a good relationship with. It could easily be seen as acting like a know-it-all yourself. Wait until you have established a relationship of trust, or try some of the techniques for working with a know-it-all boss below.

If the know-it-all isn’t a direct report or a colleague, but your boss. Tread carefully. Here are a few broad rules to keep in mind if you find yourself in this worst-case scenario:

Rule #1: If the issue doesn’t matter, just leave it alone. Letting know-it-alls go on and on may be frustrating and annoying, but save your strength for when you need it.

Rule #2: If the know-it-all is wrong, and it’s important to persuade them to consider another opinion, you have to figure out how to drive a small wedge between them and their beliefs. Try these techniques:

Rule #3: If you are successful at convincing a know-it-all boss, make sure you give them credit. For example, “Ha-yoon wanted me to check with the attorneys about the risks of this contract, and we decided…” Don’t eliminate your role in the situation, but be sure to attribute some part of the decision to the know-it-all as well.

And remember — whether the know-it-all is your direct report, colleague, or boss, never, never compete. Competing won’t change a know-it-all’s behavior. You’ll just end up looking like a know-it-all yourself.

To Achieve a Major Goal, First Tackle a Few Small Ones
Research: Objective Performance Metrics Are Not Enough to Overcome Gender Bias