The ability to focus is an important driver of excellence. Focused techniques such as to-do lists, timetables, and calendar reminders all help people to stay on task. Few would argue with that, and even if they did, there is evidence to support the idea that resisting distraction and staying present have benefits: practicing mindfulness for 10 minutes a day, for example, can enhance leadership effectiveness by helping you become more able to regulate your emotions and make sense of past experiences.  Yet as helpful as focus can be, there’s also a downside to focus as it is commonly viewed.

The problem is that excessive focus exhausts the focus circuits in your brain. It can drain your energy and make you lose self-control. This energy drain can also make you more impulsive and less helpful. As a result, decisions are poorly thought-out, and you become less collaborative.

So what do we do then? Focus or unfocus?

In keeping with recent research, both focus and unfocus are vital. The brain operates optimally when it toggles between focus and unfocus, allowing you to develop resilience, enhance creativity, and make better decisions too.

When you unfocus, you engage a brain circuit called the “default mode network.” Abbreviated as the DMN, we 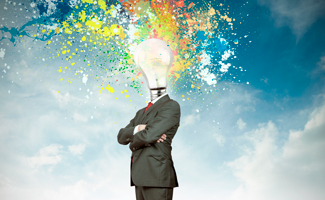 used to think of this circuit as the Do Mostly Nothing circuit because it only came on when you stopped focusing effortfully. Yet, when “at rest”, this circuit uses 20% of the body’s energy (compared to the comparatively small 5% that any effort will require).

The DMN needs this energy because it is doing anything but resting. Under the brain’s conscious radar, it activates old memories, goes back and forth between the past, present, and future, and recombines different ideas. Using this new and previously inaccessible data, you develop enhanced self-awareness and a sense of personal relevance. And you can imagine creative solutions or predict the future, thereby leading to better decision-making too. The DMN also helps you tune into other people’s thinking, thereby improving team understanding and cohesion.

There are many simple and effective ways to activate this circuit in the course of a day.

Using positive constructive daydreaming (PCD): PCD is a type of mind-wandering different from slipping into a daydream or guiltily rehashing worries. When you build it into your day deliberately, it can boost your creativity, strengthen your leadership ability, and also-re-energize the brain. To start PCD, you choose a low-key activity such as knitting, gardening or casual reading, then wander into the recesses of your mind. But unlike slipping into a daydream or guilty-dysphoric daydreaming, you might first imagine something playful and wishful—like running through the woods, or lying on a yacht. Then you swivel your attention from the external world to the internal space of your mind with this image in mind while still doing the low-key activity.

Studied for decades by Jerome Singer, PCD activates the DMN and metaphorically changes the silverware that your brain uses to find information. While focused attention is like a fork—picking up obvious conscious thoughts that you have, PCD commissions a different set of silverware—a spoon for scooping up the delicious mélange of flavors of your identity (the scent of your grandmother, the feeling of satisfaction with the first bite of apple-pie on a crisp fall day), chopsticks for connecting ideas across your brain (to enhance innovation), and a marrow spoon for getting into the nooks and crannies of your brain to pick up long-lost memories that are a vital part of your identity. In this state, your sense of “self” is enhanced—which, according to Warren Bennis, is the essence of leadership. I call this the psychological center of gravity, a grounding mechanism (part of your mental “six-pack”) that helps you enhance your agility and manage change more effectively too.

Taking a nap: In addition to building in time for PCD, leaders can also consider authorized napping. Not all naps are the same. When your brain is in a slump, your clarity and creativity are compromised. After a 10-minute nap, studies show that you become much clearer and more alert. But if it’s a creative task you have in front of you, you will likely need a full 90 minutes for more complete brain refreshing. Your brain requires this longer time to make more associations, and dredge up ideas that are in the nooks and crannies of your memory network.

Pretending to be someone else: When you’re stuck in a creative process, unfocus may also come to the rescue when you embody and live out an entirely different personality. In 2016, educational psychologists, Denis Dumas and Kevin Dunbar found that people who try to solve creative problems are more successful if they behave like an eccentric poet than a rigid librarian. Given a test in which they have to come up with as many uses as possible for any object (e.g. a brick) those who behave like eccentric poets have superior creative performance. This finding holds even if the same person takes on a different identity.

When in a creative deadlock, try this exercise of embodying a different identity. It will likely get you out of your own head, and allow you to think from another person’s perspective. I call this psychological halloweenism.

For years, focus has been the venerated ability amongst all abilities. Since we spend 46.9% of our days with our minds wandering away from a task at hand, we crave the ability to keep it fixed and on task. Yet, if we built PCD, 10- and 90- minute naps, and psychological halloweenism into our days, we would likely preserve focus for when we need it, and use it much more efficiently too. More importantly, unfocus will allow us to update information in the brain, giving us access to deeper parts of ourselves and enhancing our agility, creativity and decision-making too.

This blog first appeared on Harvard Business Review on 05/12/17.