Blogs
Full Listing
Podcasts
Miracle Cure? Why We Should Open the Door to More Foreign-Trained Nurses
Is Wage Growth Lagging? Actually It Is Where It Should Be
Why Is Future Labor Shortage Risk in IT Occupations Low? Census Bureau Offers Answers

Editor’s note: On the September edition of Policy Watch, a webcast series brought to you by The Committee for Economic Development(CED) of The Conference Board, the authors, along with Executive Vice President of CED, Michael Petro, will discuss the relationship between immigration and the future labor shortage risk in nursing in more detail. In addition, they will examine why immigrants seeking employment in computer specialty occupations have an easier time navigating the U.S. immigration system even though The Conference Board finds that future labor shortage risks are lower in these occupations than in most health occupations.

Perhaps no profession better illustrates the difficulty of crafting broadly applicable, temporary and permanent skilled worker visa regulations than does nursing. The Conference Board’s Labor Shortage Index rates registered nurses (RNs) in the 94th percentile in terms of risk of labor shortage over the next decade. This result is not surprising. As the US population ages, not only will the labor force grow at an unprecedentedly low rate, but a higher percentage of elderly workers will inevitably result in greater demand for health services generally and hence a need for more nurses.

Two solutions exist in terms of managing the supply of nurses. Either more internationally educated nurses (IENs) must immigrate to the US or the supply of native born nurses entering the profession must increase. The failure to use immigration policy to ensure an adequate supply of nurses for all time periods and locations reduces health care quality for all Americans and increases costs which of course reduces business profits.

One of the unique challenges involved in maintaining an adequate supply of nurses is that nursing employment and, indeed, employment for many health care occupations behaves counter-cyclically to the labor market in general.1 Nursing is a stable but physically demanding line of work with odd hours and comparatively low wages to alternatives trained nurses may have.  Therefore, during economic expansions, some nurses leave the profession to seek more lucrative opportunities, only to return to the profession during a recession.

In addition, in two-parent households, female nurses may return to nursing during an economic downturn if earnings from other household members fall or are lost entirely. Demand for health services is, of course, relatively inelastic to economic conditions (people get sick during both recessions and expansions), so, therefore, a volatile supply of nurses creates problems for health care providers. 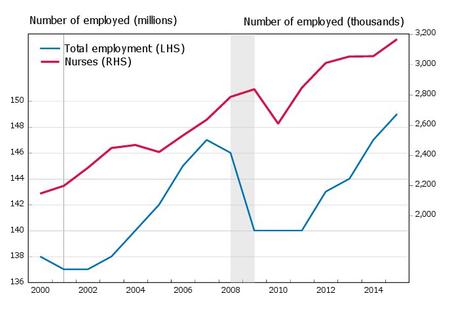 Source: Current Population Survey, calculations by The Conference Board

Traditionally, immigration, particularly from the Philippines, has played a critical role in alleviating shortages of nurses.2 Currently, Filipinos represent 5 percent of the total supply of practicing nurses in the US. In states like California and Alaska, Filipinos represent 20 and 25 percent of the total supply respectively.

However, the flow of Filipino nurses, and those from other large sending countries like India, started to fall sharply after 2006, posing a great challenge for the whole health sector.  The causes of this slowdown reflect reduced access that nurses of all nationalities have to both permanent and temporary employment visa channels as a result of the structure of US immigration policy and its failure to adapt to the special circumstances of nursing. We dive briefly into the administrative aspects of such visa requirement: it is not entertaining but it remains a necessary exercise if one wants to find a solution to such alarming shortage.

Immigration of nurses fell off quickly after 2006

Source: American Community Survey, calculations by The Conference Board

Following the September 11th attacks, visa processing for employment-based visas slowed as new security measures were implemented. Because each country is limited to 7% of the entire pool of 140,000 such visas awarded annually, four large immigrant sending countries, India, China, Mexico, and The Philippines began experiencing long backlogs.  As of August 2016, the employment-based visa category for skilled workers including nurses (EB-3) had a 12-year wait for Indian immigrants, a 7-year wait for Filipinos immigrants, and a 6 ½- year wait for Chinese immigrants (more info in the State Department’s visa bulletin). These per-country waiting lists group nurses with all other skilled occupations; in other words, there is no prioritization of nursing as a high-shortage occupation.3

Just as importantly, nurses have limited access to temporary work visas. Given the rapidly changing level of domestic nurse supply, having immigrants work temporarily in the US is a valuable supply management tool.  H-1B skilled worker visas are essentially off limits to nurses, because a four year/bachelor’s degree is not a requirement to obtaining a nursing license, while it is the minimum standard for all foreign employees admitted under the H-1B program. The 1989 Immigration Nursing Relief Act created an H-1A temporary worker visa, available to sponsoring health care institutions who could demonstrate that their employment of IENs would not adversely affect wages and employment opportunities for already practicing nurses and that were taking steps to reduce future dependence on IENs.4 These visas had an initial admission period of three years with a possibility of extension up to five or six years.

As a result of these requirements, H-1As were most often used to alleviate nursing shortages in the least desirable locations. When this legislation expired in 1997, Congress created a new H-1C category as part of the Health Professions Shortage Area Nursing Relief Act of 1997.5 These visas were limited to just 500 per year and placed onerous requirements on hospitals seeking to use the program. Participating hospitals had to be certified by the Department of Labor that they were located in an area with a shortage of health professionals. Only 14 hospitals ever succeeded in using the program resulting in paltry admissions numbers before the program was discontinued in 2009. Still, an expanded and more flexible temporary visa program modeled based on the intended purposes of the H-1C program could play a key role in alleviating future shortages.

The supply of US-educated nurses has been growing steadily over the past few decades.  This is, in part, due to programs like Western Pennsylvania’s Tri-County Health Care Industry Partnership in which government agencies, health care providers, and school systems collaborated to bring more workers into the health care industry and to retain them.6  However, a Georgetown University analysis determined that the “active supply” of nurses (i.e., working, not just qualified to work) in the US will fail to keep pace with demand—producing a shortfall of nearly 200,000 nursing professionals by 2020.7 At the same time that the aging of our population creates more demand for nurses, it also reduces supply through the retirement of the aging nursing workforce.

The Georgetown study found that nursing professionals over the age of 40 now make up the majority of workers in the field, accounting for 62 percent of all RNs and 59 percent of all LPNs.  Aging affects the pipeline of young, new nurses, as well, because nurses who are educators are older and more experienced than nurses on average. The supply of nursing educators has been additionally challenged due to the shift in educational settings out of hospitals and into colleges and universities, where salaries are typically lower.

The most experienced nurses previously could combine teaching with their clinical work, and now with more of an either-or choice, they are less inclined to teach at all. Thus, the aging nursing workforce, and the decline in nursing educators in particular, is a serious binding constraint on our capacity to generate more “home grown” supply. As a result, US demand for nurses is likely to far outpace supply going forward. Meanwhile, other countries—such as the Philippines, again —are producing more nurses than they need.

Efforts to use immigration policy to maintain a stable supply of nurses illustrate the limitations of a one size fits all approach to immigration policy. Labor market demands fluctuate rapidly for different occupations and in different geographies. It is questionable, for example, whether an H-1B system that has primarily been a vehicle for IT workers to come to the US serves the economy well, given that labor shortage risks in many of these occupations is not expected to be especially high. For nursing, the reduction in permanent visas allocated to IENs has encouraged more native-born workers to enter the field. Yet, all signs indicate that this growth in supply will hardly be able to keep up with rising demand. An adaptable, easily-utilized temporary visa program is needed to alleviate such shortages, especially in locations that have the greatest difficulty attracting nurses.

There are certainly drawbacks to occupation-specific immigration policy. Future labor market demand is difficult to forecast, and it is challenging to design targeted policies that are resilient and responsive enough to the inevitable changes in economic conditions. In addition, stakeholders would lobby intensively to encourage occupation-specific regulation that best serves their special interests. It is probably best therefore to limit specific accommodations to a select group of occupations. Perhaps Congress could authorize the US Department of Labor (USDOL) to certify occupations as facing “critical shortages” and allow the USDOL to allocate a set number of “critical shortage” visas annually.  Nursing would certainly receive a healthy number of such visas.

2 During the US occupation of the Philippines which ended in 1946, American-style nursing schools were set up throughout the country. These nurses were trained in English and their skills could easily be transferred to American hospitals. Starting from 1965, when quotas on immigrants from outside Northern Europe immigrants were lifted, nurses from the Philippines began arriving in large numbers to practice in the US.

3 Worse still, often the US Citizenship and Immigration Service (USCIS) underestimates the number of waiting/pending applicants who are seeking permanent residency and is actually forced to move back the dates for the earliest considered applications in a process known as “visa retrogression.”  The current approach of considering only the oldest pending applications was implemented in 2004. Backlogs have remained a constant feature of the quest for permanent residency ever since.  Realizing that retrogression would cause a shortage of nurses, Congress authorized the “recapture” of 50,000 unused employment based visas from the post-9/11 period to be granted primarily to nurses.  Immigration of nurses from both India and The Philippines therefore remained high during this period.  By the end of 2006, however, the extra visa supply was exhausted, and with further congressional action not forthcoming, Filipino and Indian nurses were sent to the back of the queue along with everyone else from all other professions. No further legislative action since then has been taken to provide more visas for health care workers. Since then, immigration of nurses from the Philippines and India has fallen precipitously.

Is Wage Growth Lagging? Actually It Is Where It Should Be
Why Is Future Labor Shortage Risk in IT Occupations Low? Census Bureau Offers Answers