Tags
Full Listing
Podcasts
An Excellent Alternative: A New Model for Effective Leadership
You Can Change Industries When You Connect the Dots
Your Mother Was Right

getAbstract is one of The Human Capital Exchange's prestigious Knowledge Partners and offers the largest online library of the latest and most relevant business book summaries. Please see below for further suggested readings on this topic.

Pretend the Dalai Lama has applied for an important managerial spot in your organization. You quickly scan his resume. Hmmm, no business degree – not even a formal education. Moves around a lot. Never held a real job. No verifiable income or assets.

Heck, the Dalai Lama wouldn’t appear to qualify for even an entry level position, yet people around the globe benefit from his wise counsel and admire his philosophical approach to life. While seemingly the polar opposite of the prototypical, hard-charging corporate executive, the Dalai Lama in fact promotes values and expectations that every workplace should emulate. 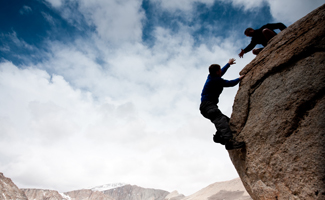 If kindness, empathy, and civility aren’t part of your culture, then your bosses aren’t delivering the right message. “My-way-or-the-highway” may have been an effective managerial style years ago – but not anymore. Alternative leadership theory suggests that CEOs, executives and managers must be a lot more sensitive to their employees’ needs. Paychecks and benefits are great, but workers want a fair playing field and the feeling that they matter.

Though they likely have never set foot in a corporate boardroom, prominent and respected world figures such as the Dalai Lama and Pope Francis firmly believe in the principles of alternative leadership. In their eyes, everyone is important and has something unique to offer. Truly transformative leaders, they insist, look beyond themselves and their immediate interests. The greater good is their priority.

“The Dalai Lama’s leadership message revolves around a central organizing principal: genuine compassion,” author Daniel Goleman writes in an excerpt on ideas.ted.com from his 2015 book, A Force for Good. “The Dalai Lama looks beyond the givens of today’s reality to offer a map to a better future worldwide.”

Like the Dalai Lama, Pope Francis not only champions compassionate leadership, but also believes that humility is a leader’s most important trait. He proved it time and again as an assistant bishop in Buenos Aires, Argentina, reaching out to drug addicts in the city’s hazardous slums. As the leader of the Catholic Church, Jorge Mario Bergoglio has demonstrated decisiveness, statesmanship and political savvy without compromising his humanity.

“Pope Francis shows himself to be a leader who understands that leaders lead people, not institutions,” writes Jeffrey A. Krames in Lead with Humility, a 2014 book that is one of getAbstract’s most popular summaries. “Being a humble leader does not prevent Francis from exercising authority and power when needed.”

In other words, don’t mistake kindness for weakness. Practicing alternative leadership doesn’t make you a pushover who’s reluctant to yield a little power. To the contrary, it means you are an intelligent, self-aware individual embracing the evolution of the managerial paradigm. And you can do a lot worse than keeping company with the Dalai Lama and Pope Francis.