Tags
Full Listing
Podcasts
The New Normal in the U.S. Economy is Slower Than You Think
Large Variation in Working-Age Population Projections Across States
Why Overtime Pay Doesn’t Change How Much We Work

This blog is going to be relatively short because, as they say, a picture is worth a thousand words. In recent months, one of the charts that I have been presenting, featured below, has made a particularly strong impression. I thought it was worth writing a short blog about it.

So what’s in this chart? The yellow line shows the five year percent change in US labor productivity for the non-farm business sector. In the past five years (ending in Q1 of 2015), labor productivity grew by just 0.6%, the lowest growth rate on record except during the recessions of the early 1980s. To have such weak growth in a period of economic expansion is unprecedented1. 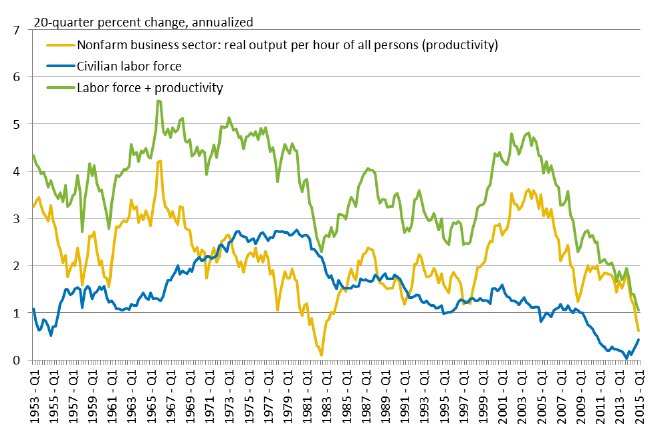 Source: BLS; calculations by The Conference Board

The blue line shows the growth rate of the labor force, which has been historically low in recent years for two main reasons: (1) the massive retirement of the baby boomers, and (2) the participation rate of the working-age population declined and has yet to recover. The most interesting line, though, is the green line, which is the sum of the yellow and blue lines. The green line could be viewed as the growth rate of the production capacity of the US labor force. In other words, it is quite similar to the growth rate of potential GDP. In the past five years this measure grew at just 1%, which is by far the lowest ever recorded in the United States. Until now it was never below 2%, and it usually hovered around 3-5%.

Chart 2 (Click to expand): How does it compare to actual GDP Growth?

Source: Haver Analytics; calculations by The Conference Board

In Chart 2, we show how this line compares to actual GDP growth in recent decades. On average, actual GDP grew more slowly than the sum of labor force and productivity growth2.

So does that mean the new trend growth for the U.S. economy is just one percent? No, I wouldn’t go that far, but 1.5% sounds reasonable. Regarding labor force growth, I don’t expect it to accelerate in the coming years given the weak projection of working-age population growth. The BLS projects the labor force to grow just 0.5% from 2012 to 2022.

Regarding productivity growth, there is a huge debate among economists (see here and here), but it would not be that surprising if the new trend in total economy productivity growth does not exceed 1%. As a result, a new trend growth for the U.S. economy that is no higher than 1.5% wouldn’t surprise me. If that turns out to be the case, GDP will grow much more slowly in the coming decades than official forecasts from the White House, Congress and the Federal Reserve (all projecting 2-2.5 percent), with major implications for fiscal and monetary policy.

Businesses as well are likely to be influenced by this new normal. As we discussed many times, the tightening labor market is creating labor shortages which will impact hiring, retention and compensation growth. On top of that, weaker growth of the economy will limit revenue growth with further negative implications for corporate profits.

1 In a recent report, The Conference Board details the context of the productivity crisis in depth, illustrates the relationship between productivity and profitability, and provides specific ways to reverse the productivity slowdown. Click here to read it.

2 which is partly due to the fact that the productivity measure we use is for the non-farm business sector. Productivity in this sector typically grows faster than productivity for the US economy as a whole.