It’s a fabled story about a janitor’s exchange with President Kennedy during the early days of NASA: “What do you do?” the president supposedly asked the man with a broom during a visit to Cape Canaveral. “Well, Mr. President, I’m helping to put a man on the moon.”

This meeting may not have actually taken place. But there’s a good reason it’s one of the most commonly-repeated management anecdotes: it illustrates the idea that a workforce motivated by a strong sense of higher purpose is essential to engagement. A survey by Calling Brands found that working for an organization with a clearly defined purpose is second only to pay and benefits in importance for employees, and ranks ahead of promotion opportunities, job responsibilities, and work culture. Two-thirds said a higher purpose would motivate them to go the extra mile in their jobs. A similar study by Net Impact showed that almost half of today’s workforce would take a 15% pay cut to work for an organization with an inspiring purpose.

Convinced that today’s workforce wants more than what they can see in their paychecks, our firm recently launched an initiative aimed at inspiring our already high-morale workforce reach new levels of engagement by reframing and elevating the meaning and purpose of their work. The results have exceeded our expectations. Our partners and employees have flooded us with stories, our morale scores have soared, and turnover has plummeted. Perhaps coincidentally, the firm also enjoyed one of its best financial years in recent memory—ranking as the fastest growing of the Big Four public accounting firms.

How We Did It

First, our firm needed to articulate our higher purpose. Extensive research, including hundreds of interviews, resulted in a new purpose statement: Inspire Confidence. Empower Change. But we knew we needed to do more than simply announce our purpose and expect it to take hold. We needed employees to experience it for themselves.

So, last year, we embarked on an initiative to build a stronger emotional connection to the firm and to have our people look at their work from a different perspective. It started with a simple question, “What do you do at KPMG?” and a video that answered: “We Shape History!”

The video highlighted dramatic, largely forgotten stories about KPMG’s role in historic events: how we managed the Lend-Lease Act to help defeat Nazi Germany; resolved conflicting financial claims to lay the groundwork for the release of the U.S. hostages in Iran in 1981; and certified the election of Nelson Mandela in South Africa in 1994.

We created vivid posters like “We Champion Democracy” that celebrated the difference our people make on behalf of clients, communities, and society, and displayed them prominently in our offices. We reframed their roles, encouraging them to see themselves not simply as professionals executing audits, for example, but as members of a profession that helps millions of American families make better informed decisions about investing their life savings.

Most importantly, we recognized that just telling people from the top down about their higher purpose would not succeed. We encouraged everyone—from our interns to our Chairman—to share their own stories about how their work is making a difference.

To help, we developed an application that enabled our people to create and share digital posters modeled after the corporate posters that we created. Calling it the 10,000 Stories Challenge, we asked our 27,000 partners and employees in June to develop posters, as individuals or teams. We offered an incentive of two extra paid days off at the end of the year if we met the 10,000 stories goal by Thanksgiving.

ONE OF THE FIRST POSTERS CREATED BY KPMG TO LAUNCH ITS HIGHER PURPOSE INITIATIVE (LEFT) AND TWO EXAMPLES OF THE MORE THAN 42,000 PURPOSE STORIES SHARED BY EMPLOYEES. COURTESY OF KPMG

Instead, we surpassed the goal before the Fourth of July. Soon, it became clear that the incentive wasn’t the primary motivator — we received thousands more stories even after we announced the extra days off were assured. In a startling display of our people’s pent up appetite to express the meaning of their work, by Thanksgiving we had received 42,000 stories.

On our annual partner survey, 90% reported that the higher purpose initiatives increased people’s pride in KPMG. Scores on our employee engagement survey rose to record levels as well. Less than six months into our Purpose initiative 85% of employees agreed that KPMG is a great place to work, up slightly from 82% a year earlier; after a year scores on this same question rose to 89%. Additionally, 60% said our purpose initiative strengthened their pride in KPMG and our work. This improvement in morale also resulted in KPMG surging 17 spots on FORTUNE magazine’s annual 100 Best Companies to Work For list, making us the number one-ranked Big Four firm for the first time in our history.

In that same survey, 76% of our employees said their “job had special meaning (and was not just a job),” six points higher than the average of our Big Four counterparts and a four-point jump year over year.

Some of our most interesting findings came from comparing survey scores of employees who said their managers discuss higher purpose with the scores of employees whose leaders don’t. While correlational and not necessarily causative, we found a strong association between leaders who talk about the positive societal impact of their teams’ work and a variety of positive human resources and business indicators. 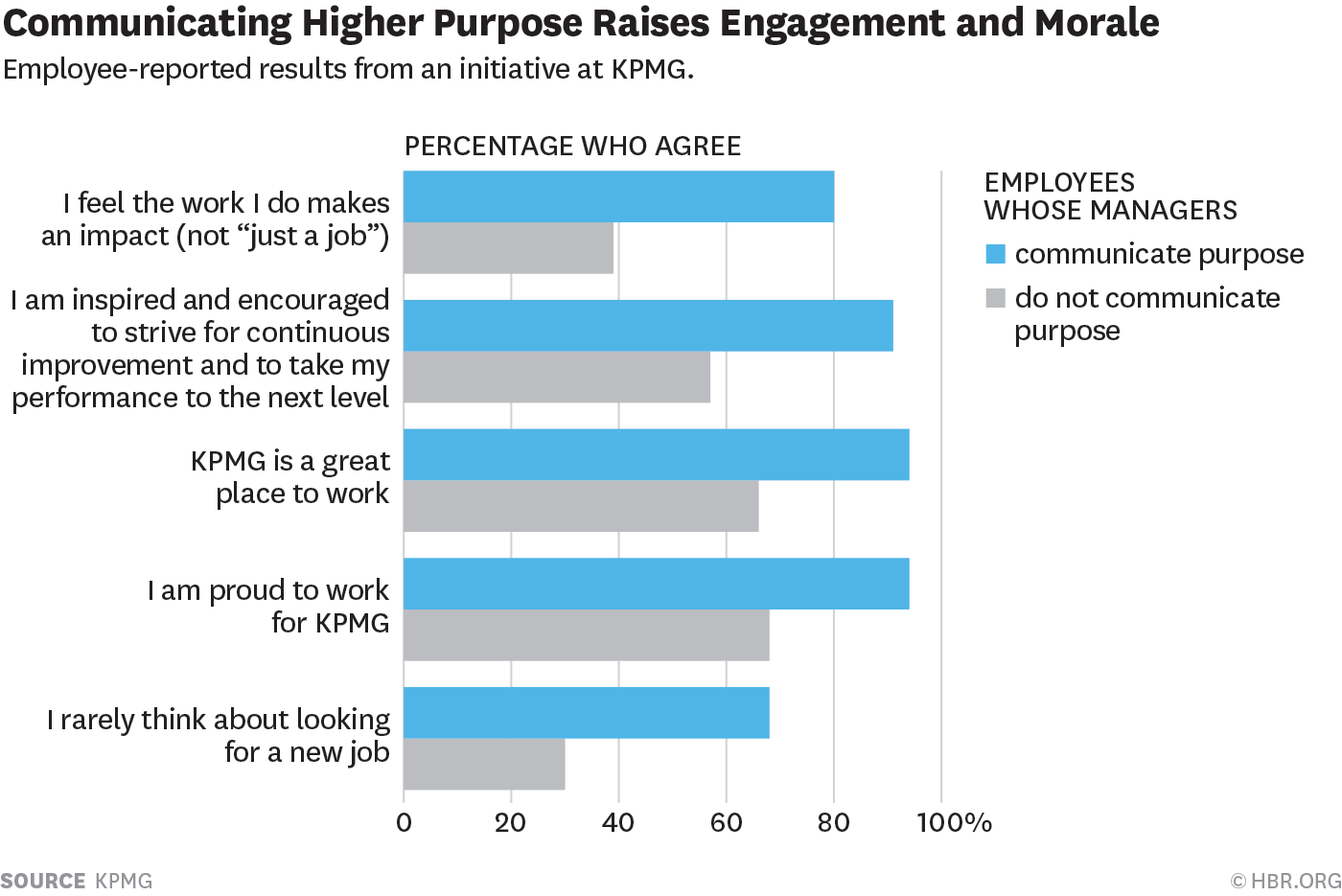 As the chart above shows, among employees who told us their leaders discuss higher purpose, 94% said KPMG is a great place to work, and 94% said they are proud to work for KPMG. But among those whose leaders don’t discuss purpose, the corresponding results dropped to 66% and 68%. This group also reported they are three times more likely to think about looking for another job than those whose leaders do talk about purpose. Not surprisingly, year-to-date actual turnover of these two groups is dramatically different, 9.1% vs 5.6% respectively. What’s more, employees whose leaders communicated about purpose were far more motivated to strive for continuous improvement and high performance than colleagues whose leaders failed to discuss this important topic.

These big differences show up across generations of employees, regardless of whether someone is a Millennial or Baby Boomer. Moreover, relative to their representation in our workforce, older employees (those over 40) had proportionately somewhat higher participation in our 10,000 Stories Challenge than younger employees—suggesting that with all we hear about the difference in career attitudes among Millennials, Gen Xers and Baby Boomers, and the desire to recognize and express the higher purpose in one’s work, seems to cut across generational boundaries.

While our higher purpose initiatives have succeeded beyond our most optimistic expectations, they have not been free of challenges, missteps and unanticipated issues. Below are some key stumbling blocks and how we addressed them.

Overcoming an academic focus. At the start of our efforts we probably spent more time than necessary focused on the academic, philosophical, and theoretical elements of higher purpose. Perhaps because of our profession’s natural predilection for relying on clearly documented rules and definitions, we spent months considering the distinctions between purpose, vision, mission, ethos, and culture. And while this probably served a constructive function for the core project team, it seemed to either bore or confuse the very leaders, partners and employees we were attempting to engage.

We soon realized that our objective was not to edify people on the structure and objectives of national anthems; rather, it was to fill them with the pride, optimism and commitment that results from hearing the national anthem. From that point on, we eschewed the didactic and focused on creating an emotional connection with our people by showing them, and having them show us, why their work mattered.

Breaking through the message clutter. Like many large organizations, KPMG is challenged with information and message overload. So we were determined to make our purpose messaging both noticeable and memorable, engaging a third-party creative and communications agency. While we were ultimately successful, it was a heavy lift to convince our senior leadership team—which has always been skeptical of the return on investment of external advertising—to invest in a seven-figure communications campaign.

Overcoming risk aversion and hyper-conservatism. By training, policy and, some would say, temperament, a significant portion of our partners and employees tend to be cautious, precise and circumspect in their language and judgments. Sweeping statements that lack adequate proof points or qualifying explanations are almost reflexively met with professional skepticism. In this context, dramatic headlines like “We Shape History” or “We Champion Democracy,” at first made some of our leaders uncomfortable. Fortunately, these concerns dissipated in the early stages of the initiative once they saw how positively our people responded to the powerful media we created and how enthusiastically they participated in creating their own dramatic declarations of purpose.

Exacerbating morale problems in certain groups. We noted earlier that employees whose leaders spoke about higher purpose were more engaged, motivated, and committed than those with leaders who failed to do so. Moreover, the employees with purpose-driven leaders showed improvement in their engagement levels in the year after we began our firm-wide purpose initiatives. By contrast, employees whose leaders did not talk about purpose actually saw a significant (6-11 percentage point) downturn in key engagement indicators.

At first, this finding seemed counterintuitive (i.e., even if this group is not as engaged as their counterparts, shouldn’t the firm-wide messaging have at minimum improved their levels of engagement?) But upon more thought, we believe the downturn in morale may have resulted from the increased cynicism engendered by the perception of leadership hypocrisy (in other words, “Leadership tells me we are purpose-driven, but my boss never says a word about it.”).

The fact that some of our leaders aren’t yet talking about higher purpose represents a huge opportunity to increase engagement levels even further. We’re now incorporating purpose storytelling training into our leadership development programs and helping participants develop compelling narratives and move past any reluctance to self-disclose. In other words, we’re helping them to speak to people’s hearts as well as their minds.

One graduate of this training brought 1,500 interns to their feet after she spoke to their hearts about her own higher purpose. She concluded by recounting the parable of three bricklayers who were rebuilding a church after it had been damaged by fire.

The construction architect observed the three workers on a scaffold, and asked “What are you doing?” to which the first bricklayer replied, “I’m laying bricks.” The second responded, “I’m repairing a wall.” But the third replied, “I’m building a cathedral to The Almighty.”

“So, “ our partner asked the crowd, “Do you want to be bricklayers or cathedral builders?” After her presentation, a crowd of enthusiastic interns surrounded her and more than a hundred emails followed, all with the same clarion message: “I want to be a cathedral builder.”

We’ve learned many lessons in the course of our Higher Purpose initiative, but none greater than recognizing the extent of the workforce’s pent-up appetite to build cathedrals—or fight terrorism, or protect life savings, or champion democracy—rather than simply lay bricks.

Ultimately, unleashing the untapped power of people inspired by a sense of purpose has not only heightened employee engagement, satisfaction and loyalty, but driven our employees to strive for peak performance as well.