Labor shortages are becoming one of the main barriers for sustaining a healthy US economy, especially in industries that hire many blue-collar and manual service workers. Is this a passing phase or a long-lasting problem?

From a demographic perspective, labor shortages are only going to intensify in the coming decade. The working-age population will barely grow as the number of workforce entrants barely keeps up with the exodus of retirees. And there will be fewer people available for blue-collar and manual services work as the drop in the number of non-college graduates accelerates.

But there are also some positive developments. Companies facing the most severe recruitment difficulties, especially in blue-collar industries, are contributing to raising labor force participation by expanding recruiting efforts to under-represented populations and lowering educational requirements. Based on results from The Conference Board Labor Shortages Solutions Survey, 59 percent of companies more affected by labor shortages increased their efforts to recruit underserved populations such as women, mature workers, the disabled, immigrants, and veterans, compared to just 35 percent of less affected companies. Notably, expanding the target demographic was used by 55 percent of blue-collar-heavy companies compared to only 30 percent of primarily white-collar companies, making it one of the recruitment tactics used more intensely to fill blue-collar than white-collar roles. A few examples: 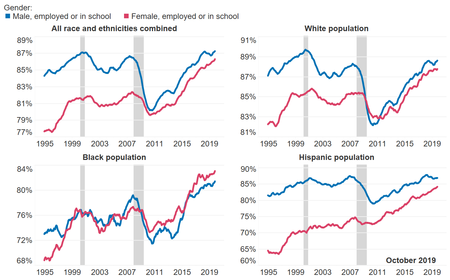 Black workers. For black workers, the increases in employment are visible across all occupations but are most visible in blue-collar occupations (Chart 2). 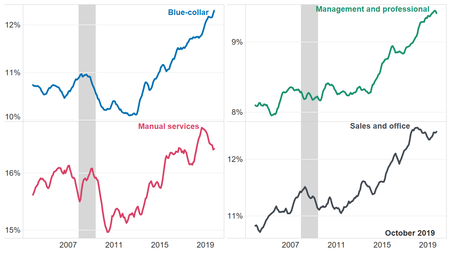 Hispanic women. The growth in the share of Hispanic women ages 20–29 in manual services and sales and office jobs has been remarkable (Chart 3). Again, much of the increase is a result of a decline in the amount of family-related responsibilities at this age. 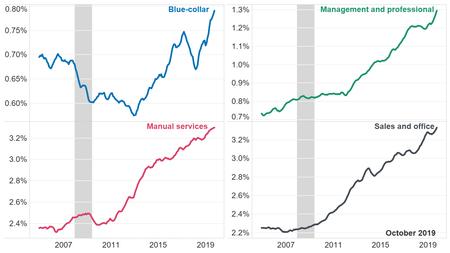 Despite these overall improvements, participation rates for most minority groups are still low compared to other groups. Yet, as mentioned above, companies facing the most severe recruitment difficulties are widening their talent pools much more actively than companies with fewer recruitment problems, primarily by expanding their target recruitment demographic.

The manufacturing, transportation, and construction industries are among those that have the most to gain from targeting an alternative workforce, especially women. For example, some construction companies are attracting women by investing in smaller personal protective equipment— such as hard hats, safety goggles, respirators, and fall-protection harnesses—that better fits women’s bodies. And through the Manufacturing Institute’s STEP Ahead initiative, companies such as Caterpillar, Proctor & Gamble, and 3M are recognizing female employees and encouraging them to serve as role models for other women to join the industry.

Military veterans represent another underutilized population. Several manufacturers we interviewed are heavily recruiting veterans by working with local military bases and transitional officers, or by partnering with programs such as Operation Reboot or Heroes Make America that assist veterans with the transition from military service to the private sector.

Companies are also tapping into their local immigrant and disabled populations through training programs and community partnerships. One manufacturer we interviewed is targeting their local Hmong population by hiring specialists in the Hmong dialect spoken in the area and offering employees English-as-a-second-language training. Another manufacturer we surveyed is partnering with a local nonprofit called RCS to contract mentally and developmentally disabled adults for packaging and assembly services. And companies like SAP, Ford, and JPMorgan Chase have launched Autism at Work or other hiring programs that reach out to the autistic community and others with neurodivergent conditions.

As the workforce continues to age, more companies should also be concerned about retaining mature workers. Research shows that employers that offer jobs with flexible work schedules, reduced stress, and lower physical demands are more likely to attract and retain older workers. One manufacturer we spoke to went so far as to pursue additional investments in automation and robotics as a way to adapt work to older employees facing physical limitations.

As these examples show, some companies are implementing innovative strategies to expand their recruitment demographic and retain diverse employees. But as labor shortages intensify, more HR departments will have to turn to innovative solutions for recruiting and retaining diverse workforces.