Even after several years of extensive research, it is not entirely clear what caused the slowdown in productivity growth. We believe that part of the slowdown was a result of a large labor market slack and low wages throughout most of the post financial-crisis period, which reduced the incentive to automate and cut labor costs. If that explanation is true, then the recent tightening of the labor market and acceleration in wages should lead to a recovery in labor productivity. 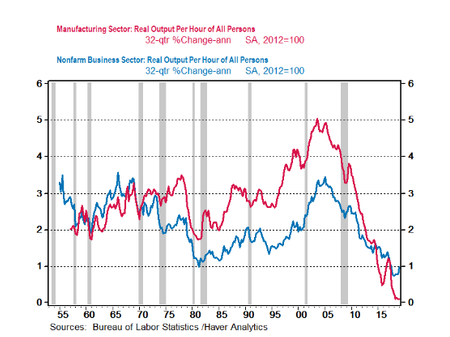 There are growing signs that the long-awaited improvement in productivity growth has finally arrived. During 2018 the US economy experienced a strong acceleration in GDP growth, but employment growth barely accelerated at all. As such, in the past four quarters, labor productivity grew by 2.5 percent, the highest rate since 2010 (Chart 2). In recent years, the economy has experienced bouts of accelerating labor productivity that quickly died down. The current acceleration may have more staying power because the labor market is so tight. In many industries, recruiting is very difficult, and employers are forced to increase production without rapidly raising headcount. 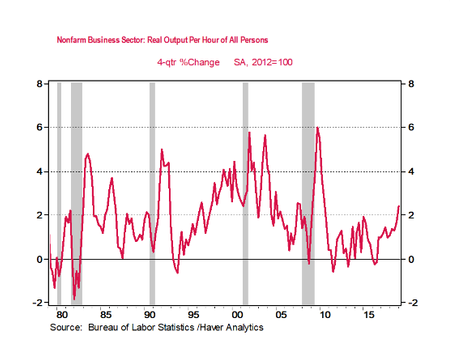 And there is more evidence of a recent recovery in productivity.

If there is an increase in automation activity, one would expect to see a larger impact on employment in occupations that are more prone to automation. We expect that automation will reduce the demand for certain tasks in a given occupation, which will ultimately lead to slower growth or even a decline in the employment of the occupation in question. To test this hypothesis, we need somehow to define which are the most easily automated occupations. For that purpose, we are using a study by Frey and Osborne from 2013 where they assign to each occupation a probability of automation. In their paper they refer to a time horizon of 10-20 years. The occupations with a probability of 90 percent and above, we define as highly automatable. All other occupations are grouped under other occupations title. 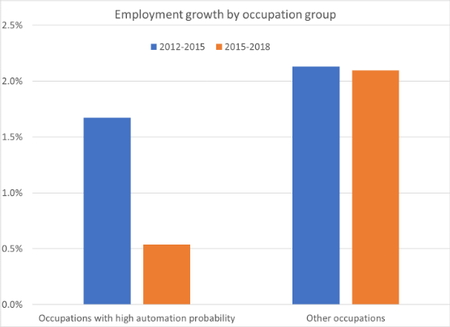 Sources: BLS Occupational Employment Statistics, Frey and Osborne (2013), and The Conference Board.

Chart 4 shows four groups of occupations where the drop in employment growth between the two periods was especially visible. In future blogs we will dig deeper into each of them. 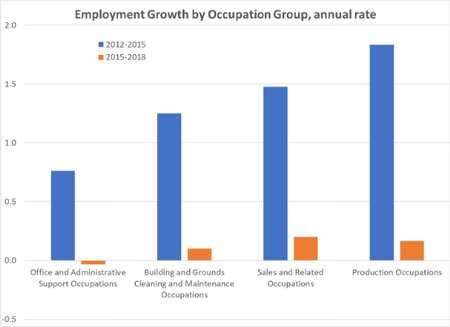 Sources: BLS Occupational Employment Statistics and The Conference Board.

Now, more than in any other time during this decade, we see signs of a comeback in automation activity. The timing could not be better. Labor shortages are becoming a growing problem for the US economy, especially in jobs that do not require a college degree, which in large part are the jobs where automation is likely to have the most impact. From a demographic perspective, this problem is only going to get worse as the number of people without a college degree in the working age population is shrinking and will do so even faster through 2030.

Increased deployment of technology in work environments will be especially valuable in the transportation and warehousing industries which are growing rapidly as a result of e-commerce and are therefore experiencing particularly severe labor shortages. Automated trucks will solve this problem in the long run, but in the next decade we need other types of automation, based on less novel technologies, to reduce the demand for labor. Recent gains in labor productivity point to an increasingly important role for technology to play in reducing labor shortages given current tight job market conditions.

Participate in our 2019 Labor Shortages Solutions Survey
Overlooked on economy? Rising paychecks for blue-collar workers are shrinking the wage gap