The CEO's letter to shareholders is the chief executive's opportunity to speak to shareholders about the performance and prospects of the business in his or her own voice. Perhaps the most read of all CEO letters is the annual letter from Warren Buffett to the shareholders of Berkshire Hathaway (BRK). We wondered what draws people to Buffett's letters.

In order to create a point of comparison, we also analyzed Warren Buffett's letters from 2008 to 2017 as well as the CEO letters to shareholders from five other companies over that period.  We selected CEO letters of several U.S. conglomerates with similar size and structure to Berkshire Hathaway. These were Alphabet Inc. (GOOG) (Google's parent company), General Electric Co. (GE) and Johnson & Johnson (JNJ).  We also included the CEO letters from JPMorgan Chase & Co. (JPM), and Chubb Ltd. (CB) because the shareholder letters written by their CEO's, Jamie Dimon and Evan Greenberg, respectively, are widely respected.

Our main observations are described below.

The first observation of our study will not come as a surprise. Buffett's letters are impressively long. They are generally about 14,500 words and 30 odd pages. That is about 10 times the length of most feature articles in The Economist magazine.  Buffett's communications are about twice the length of the General Electric and Chubb Ltd. letters and five or seven times the length of the Johnson & Johnson and Alphabet Inc. letters. Buffett's letters go beyond discussions of Berkshire Hathaway's financial performance. For example, it is not unusual to find paragraphs discussing new accounting principles, the state of America, and how the average person should invest.

A unique and surprising trait of Warren Buffett's letters is the neutrality in their sentiment. Shareholder letters generally tend to take on a positive tone. Buffett's letters were the most neutral of the six letters studied, followed closely by Jamie Dimon's. Johnson & Johnson fell on the other end of the spectrum with consistently cheery letters over the 10 years examined. Buffett's neutral tone might contribute to his credibility and make him appear frank.

The VADER (Valence Aware Dictionary and Sentiment Reasoner) sentiment score shown here scores text on a scale from -1 to 1. The most positive score is 1. The most negative score is -1, and 0 is neutral.[1]

We wondered if CEO sentiment would change from year to year in accordance with company performance. To find out, we compared the sentiment of each letter with the change in the company's share price over the year.[2] We found a statistically significant positive correlation between share performance and sentiment for Chubb Ltd. and JPMorgan Chase. If we extend the number of years studied to include 2007, Warren Buffett's sentiment also had a significant relationship with the share performance of Berkshire Hathaway. This is interesting because we only found evidence of this relationship for the three companies we chose as examples of effective shareholder letters. Warren Buffett, Jamie Dimon, and Evan Greenberg appear to share the tendency to adjust their tone in accordance with events that impact shareholder confidence. There is no statistical evidence that the other CEOs do the same. Shareholders may feel more inclined to trust CEOs that are candid about challenges facing the company.

In the same vein, both Warren Buffett and Jamie Dimon were dramatically more likely to discuss mistakes compared to the other CEOs analyzed. Buffett and Dimon used words like mistake, blunder, or error an average of more than seven times per letter. Comparable discussions were almost non-existent in the other letters we reviewed.

“A few [operations], however – these are serious mistakes I made in my job of capital allocation – have very poor returns. In most of these cases, I was wrong in my evaluation of the economic dynamics of the company or the industry in which it operates, and we are now paying the price for my misjudgments. At other times, I stumbled in evaluating either the fidelity or the ability of incumbent managers or ones I later appointed. I will commit more errors; you can count on that. If we luck out, they will occur at our smaller operations.”

"We hope that in the future, the regulatory response to any mistakes – if and when they happen, and they will happen – will take into account the extraordinary effort to get it right." 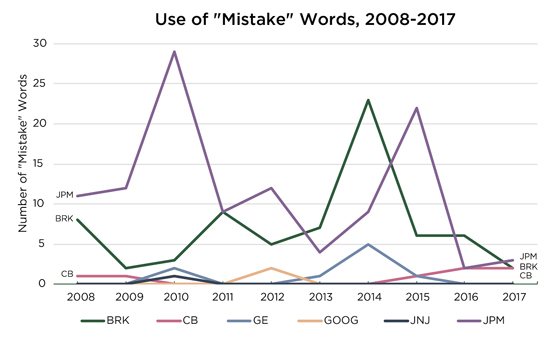 When we read a sample of Warren Buffett's letters we noticed that he lauds the accomplishments of his managers frequently and specifically, often calling them out by name. Our analysis supports that observation.  Buffett uses the word manager(s) an average of 19 times a letter. JPMorgan Chase referred to managers five times per letter and the other CEOs referred to managers zero to one time. Seventy percent of Buffett's sentences containing references to managers were positive or very positive and only 14 percent were negative. Based on our review of a sample of the negative sentences, none of the negative sentences were references to internal managers at Berkshire Hathaway. Warren Buffett appears to have a commendable trait of owning up to his own mistakes and focusing on the accomplishments of others.

"USF’s [U.S. Floor] managers, Piet Dossche and Philippe Erramuzpe, came out of the gate fast, delivering a 40% increase in sales in 2017, during which their operation was integrated with Shaw’s."

"Under CEO Mark Donegan, PCC has become the world’s premier supplier of aerospace components (most of them destined to be original equipment, though spares are important to the company as well). Mark’s accomplishments remind me of the magic regularly performed by Jacob Harpaz at IMC, our remarkable Israeli manufacturer of cutting tools. The two men transform very ordinary raw materials into extraordinary products that are used by major manufacturers worldwide."

Corporate results are communicated to shareholders through an array of regulatory filings. The CEO letter offers the opportunity to describe those results less formally and in the voice of the CEO. Shareholders and other stakeholders develop a sense for the chief executive's leadership style through the tone and content of those communications. In the case of Warren Buffett, the tone and content is unique and effective.

Natural language processing and sentiment analysis are useful tools for understanding the CEO's style of communication (including in comparison to others). This piece gives the CEO the opportunity to consider whether their existing style is effective in communicating his or her message or whether changes should be made.

[1] We relied on the VADER sentiment analysis model developed by Hunter, C.J., and Eric Gilbert. For more information please refer to the following paper:

[2] Change in share price is calculated using the average share price for the first ten and last ten trading days of the year.