Blogs
Full Listing
Podcasts
On Governance: Beware Directors, Your Seat May not be Safe
Driving Continuous Improvement for The Allstate Foundation
Why India Presents a Big, Long-Term Opportunity for Apple’s iPhones

One year after activist shareholders won 65 board seats in a record-breaking first quarter on the way to 160 for all of 2018, corporate directors continue to lose seats at a pretty good clip in 2019.

The drive to oust some directors is coming from large institutional investors who are advocating company break-ups or divestitures, pushing gender diversity on boards, and persuading boards to focus more on company culture and purpose in light of the recent spate of CEO workplace misconduct.

Lazard, the financial advisory and asset management firm, reported that activists have won 39 board seats in the first quarter of 2019 at 28 companies. There have been 57 new campaigns filed against 53 companies during the quarter. Of those, nearly half involved M&A-related transactions where investors wanted to sell the company or try to break-up or divest parts of the company.

According to Lazard, there are 103 board seats in play for activist shareholders in the 2019 proxy season. What’s worth noting is that activists won all 39 board seats through settlements as only three proxy fights actually went to a vote. Also, there was a surge in so-called long-slate nominations (where activists seek to replace more than half of the board) accounting for 77 activist board seats being sought. This year, long-slate campaigns make up 36 percent of board change campaigns compared to 17 percent in 2018 and only 3 percent in 2017.

What’s keeping the pressure on corporate directors is the number of activist demands by non-activist investment firms, which jumped from 117 in the 12 months ending March 31, 2016, to 165 in the same timeframe in 2019, according to ValueWalk. A recent ValueWalk article quoted a New York law firm activist and equity investment group co-chair as saying his firm’s clients had nominated activist directors at nearly 40 companies so far this year. 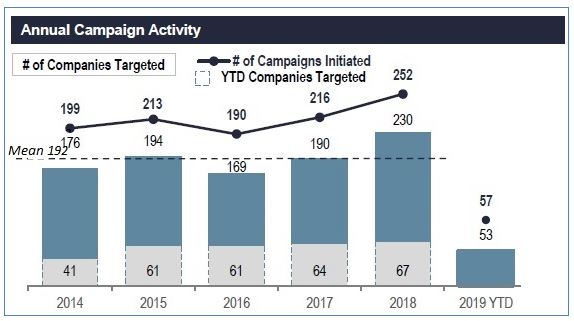 The mounting pressure from such large passive investors as State Street and BlackRock on governance issues such as board gender diversity and corporate culture/purpose is keeping many directors in the crosshairs. In their 2019 proxy voting guidelines, State Street said it would vote against the entire nominating committee of a company with no female directors that has not engaged with State Street on gender diversity for three consecutive years beginning 2020 and BlackRock said it “would normally expect to see at least two women directors on every board.”

Two campaign target cases worth noting are Pacific Gas & Electric, which had filed for bankruptcy protection earlier this year after substantial losses related to wildfires, and Bed Bath & Beyond, whose earnings have foundered recently.

In the case of PG&E (see The Conference Board’s recent Sustainability Matters report [registration required]), PG&E Corp. reached a deal to replace one of its board members with a director proposed by activist investor Blue Mountain Capital, while also naming a former federal safety official as an adviser to help guide the bankrupt utility’s restructuring. Blue Mountain had proposed a proxy fight at the May 21 annual meeting before the settlement was announced. Subsequently, the annual meeting was postponed until sometime in June.

In the case of Bed Bath & Beyond, a group of three activists (Legion Partners, Macellum Capital Management, and Ancora Advisors) started a campaign on March 26 to replace the CEO and board citing dissatisfaction with company performance. While the company did agree on April 22 to replace half of the 10-member board with independent directors as well as form a business transformation and strategy review committee, the activists are pushing for replacing the CEO and making other changes.

Whether or not 2019 winds up breaking the 2018 record for successful director replacement campaigns, corporate directors best pay heed to the attention both activist and non-activist investors are giving to the underlying reasons for replacing directors. In addition to the traditional activists who are looking to create more shareholder value through M&As, breakups or outright sales, the non-activists want governance-related changes. This environment should make sitting directors aware of the vulnerability of their once-secure board seats.