Tags
Full Listing
Podcasts
Recession Signals from the UK Leading Economic Index
Financial Times Op-Ed: We May be Missing the Productivity Revival in the Global Economy
The Risk of a UK Recession is Growing

Is a recession on the horizon in the UK? The short answer to this question is: yes. The probability of a recession in the near term has risen substantially. The UK business cycle is maturing and the lack of certainty around Brexit makes it difficult for consumers and businesses to make plans about the future. These are the ingredients that recessions are made of. The long answer requires an in-depth (and wonkish) analysis of The Conference Board Leading Economic Index for the UK.

The Conference Board Leading Economic Index® (LEI) for the UK has been in a prolonged decline for more than a year. Negative contributions from housing expectations, consumer sentiment, and labor market indicators (unemployment claims and weekly hours worked) have resulted in an annualized decline of 3.0 percent, the LEI’s slowest pace in a decade. Moreover, the weaknesses among the leading indicators have remained very widespread, with the six-month diffusion index standing at 25 percent in April 2018. Is this the signal that a recession is on the horizon for the UK?

Declines in the leading economic index on their own do not determine business cycle chronologies.[1] The LEI is a signal that either indicates the risk of entering a future recession has increased or that a recession may be ending soon. In other words, changes in the LEI’s direction must be validated before we call a recession (or the end of it). This is accomplished by analyzing the LEI’s movement across three dimensions, the so called “3Ds”: depth (strength of the decline), duration (length of the decline), and diffusion (breadth of the decline across the underlying indicators). In this blog, we focus on the signals of peaks in the business cycle, that is, signals that anticipate a recession will begin soon. 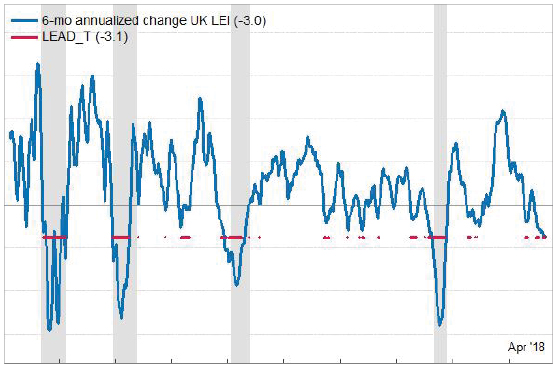 Source: The Conference Board
According to the 3D’s rule, a recession signal is generated when the annualized six-month change in the LEI (Chart 1, blue line) intersects the red dashed line which is drawn at the level of the average annualized six-month change in the LEI when it is less than or equal to zero and the six-month diffusion index is less than 50 percent (meaning that more than half of the underlying indicators are declining). An analysis of the 3Ds going back to 1970 reveals that a recession signal was consistently generated near business cycle peaks. Additionally, this rule has never generated any false signals in the history of the UK LEI. As Chart 1 shows, the recession risk has increased since the start of the year. The annualized change in the UK LEI was -3.0 percent in April 2018, slightly above the threshold of -3.1 percent (red dashed line), and the six-month diffusion index stood at 25 percent.
Chart 2: the UK LEI and CEI (1970-present) 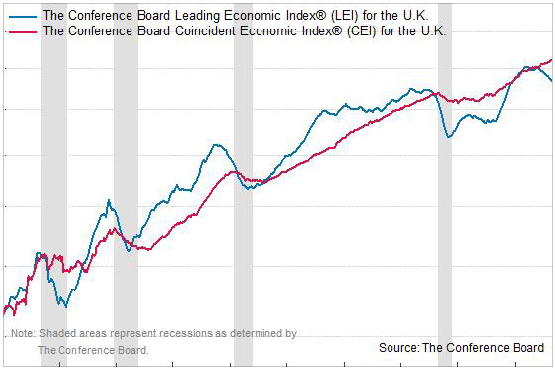 A deeper look into the LEI for the UK reveals that the non-financial components have weighed more heavily on the index since April 2017 (Chart 3, red line). The UK LEI non-financial sub-index decreased at an annual rate of 3.0 percent in April 2018. In comparison, growth in the UK LEI financial sub-index (Chart 3, blue line), which is comprised of stock prices and the yield spread, has remained positive over the same period and somewhat offset the weakness in the non-financial components. However, even the growth of the financial sub-index has moderated since 2017 from an annualized increased of 9.6 percent in May 2017 to an annualized increase of 1.5 percent in April 2018. The most recent deceleration in 2018 can be attributed to equity volatility in the first quarter (February and March). 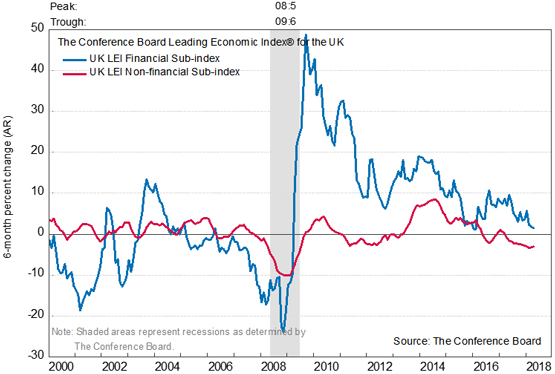 UK economic activity will remain below other mature economies in 2018

The LEI is not the only indicator suggesting a turning point in the business cycle. Real GDP growth has been moderating since 2015 (Chart 4) while first quarter results were the weakest since 2012. As a result, we have recently downgraded our estimate of UK GDP growth for 2018. The latest results from The Conference Board Global Economic Outlook (May 2018) place UK GDP growth at 0.9 percent in 2018, which is half of the growth rate for 2017 and well below the Euro Area 2018 projection of 2.0 percent. The strong growth performance in the rest of Europe during 2017 has helped the UK economy to postpone a recession down the road in 2018. But can that hold up in 2019, as the Euro Area will also see a growth slowdown and the LEIs for Germany and Spain have started to indicate some weaknesses developing in those economies? Moreover, the uncertainty about the outcome of the Brexit negotiations add to potential risks that business may pause investment and hiring prematurely. 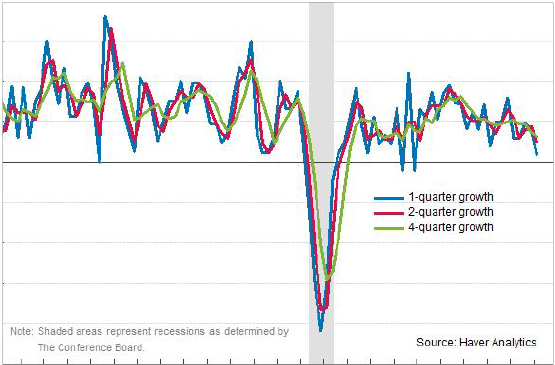 Is low unemployment the main caveat to this outlook?

Despite recession risks, the unemployment rate is at its lowest in four decades and this could still be an important line of defense against a recession. Indeed, current economic conditions remain positive, driven by low unemployment and solid retail activity. But this may not last much longer, and unemployment tends to be a lagging indicator. Above target inflation will force the central back to act more aggressively. Slower growth, weaker investment and rising unemployment is likely to result.

It is worth highlighting several risks to the business outlook. More so, the combination of leaving the EU and entering a downturn could affect a broad spectrum of companies: those that serve other businesses will likely find it more difficult to hold onto value chains. And in case of no agreement with the rest of the EU, it will be nearly impossible to move goods and services as smoothly. Consumer-facing businesses will also have a hard time. A recession will lower household disposable incomes and therefore affect sales. For businesses, this means that it will not be easy to adapt to this perfect storm.

[1] How do we know an economy is in a recession anyway? The LEI is a useful tool for assessing the risk of a recession or a return to economic growth. But, it is a forward-looking gauge. To determine when recessions begin and end, media reports often focus on two consecutive quarterly declines in GDP. However, we need to take a more nuanced view. The Conference Board uses a combination of the coincident economic index (CEI) and GDP to determine business cycle chronologies. Business cycle dates (recessions and expansions) are then determined by running a business cycle dating algorithm on the combined CEI+GDP index.

Financial Times Op-Ed: We May be Missing the Productivity Revival in the Global Economy
The Risk of a UK Recession is Growing

Consumer confidence picks up but outlook for spending still cautious 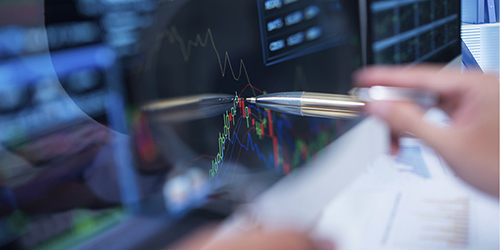 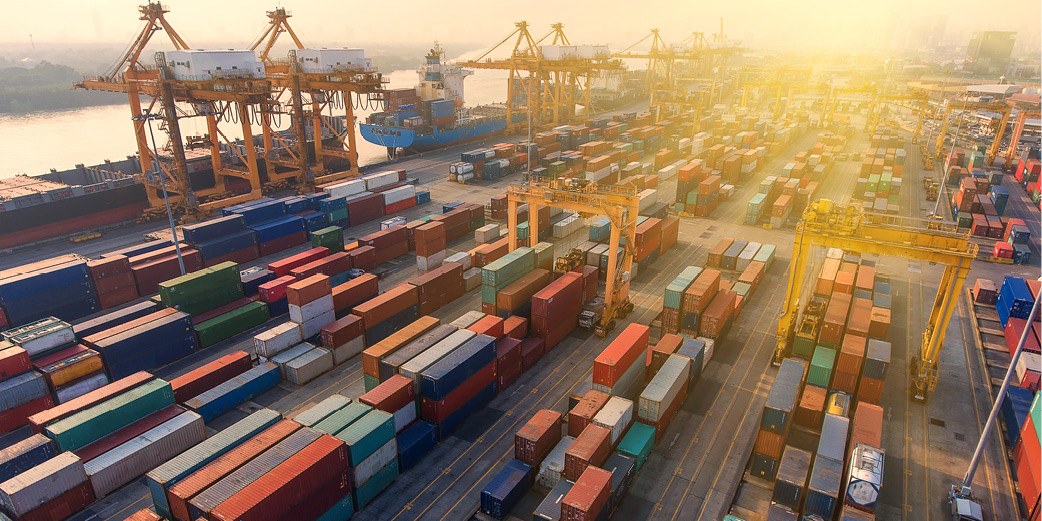 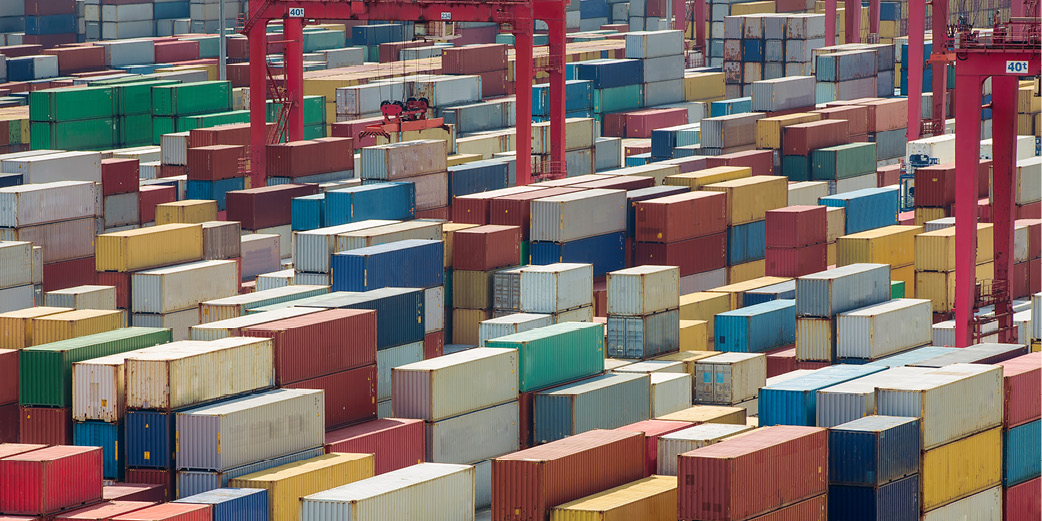 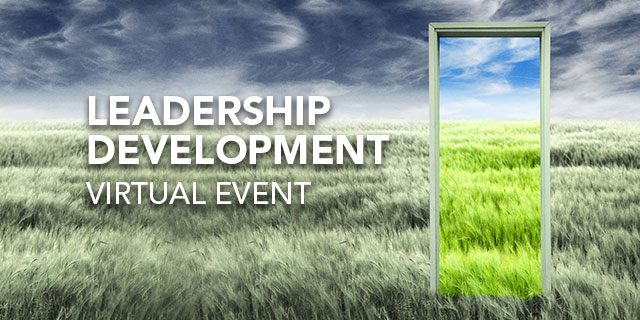